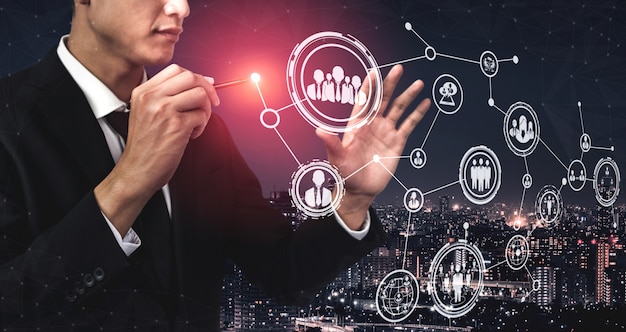 The political system of civil self-government, based on a networked organization, existing in an open, generally accessible, information space.

The information revolution has made possible the transition of governance from traditional elites and the bureaucratic system to civic elites consisting of the most intelligent and proactive members of civil society. Since for the first time in history it has made the information space open, accessible, and integrated into all areas of activity. At the same time, traditional elites, state power and big capital, have lost monopoly control over management resources. And at the same time, civil society gained access to these resources.

Feeling new opportunities, the most intellectual layer of world society began to occupy the positions of global players, forming a new organization system — Netocracy. The name netocracy, came from the merger of the words «Net Kratos» — «The Power of Networks.»

This structure is similar to Masonic lodges. Originating in the Middle Ages as a way of self-organization of the intellectual layer of society. And later became the basis of modern political parties and the administrative system. The Masonic system also played a large role in the industrial revolution and the transition of society to modern living standards from the medieval.

Netocracy, unlike closed Masonic lodges, the system is open, more intelligent and flexible. Intelligent products emanating from its focal points are broadcast immediately to the entire network and to the entire society. Each of its participants can interact with the entire system without hierarchy. There is a hierarchy in netocracy, but the position in it depends on intelligence, personal qualities, contribution to the common cause and trust.

The emergence of netocracy in modern society is an organizational revolution that is now developing as a form of civic self-organization, but in the future will become the basis of a new political and administrative system. It will form a new global elite, open and in direct interaction with society.

Netocracy does not imply the possibility of domination or monopoly, in this system all equal partners with different levels of influence and different specialization. In this system there is no ossification and retardation inherent in clan and nomenclature systems. Thanks to its advantages, intelligence, flexibility and democracy, netocracy will eventually become a leader in the world.

There are no administrative or clan barriers in a non-democratic system; admission to it is free. And the position occupied in it is completely determined by the personal contribution and trust of society.

Netocracy networks connected with the Progress and Business platform serve as a way of self-organization for progress supporters, entrepreneurs and public figures participating in the project. Facilitating self-development and the development of diverse practical activities.

Netocracy is the main system of community organization and interaction between its participants on the Progress and Business platform.

In collaboration with the Progress platform and the business, a non -ocratic community works. This is his main page.